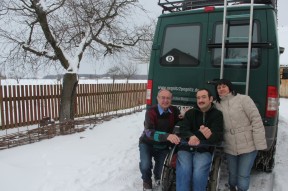 Christmas. Over the holidays you have a little more time. The year comes to an end and it´s time, to think about, what we propose to do for next year. Read a book, do more for the health, do more culturally, clean up the cellar, post always immediately, refresh friendships, sort old slides from the past , forge travel plans for the next year – that was the cue and the idea!

Where we have not yet been? Sibiria, China, Patagonia, Iran, Vientnam, Oman, Uzbekistan, Mongolia, ….

That´s the idea. Come on let´s do it! Well, to forge plans is the one, to realize plans the other.

The departure has been delayed several times, but now it´s time – the last chance for me, but not alone.

Galja, my wife and Davit, my son and wheelchair user, also run.

The route. From Pegnitz to Pegnitz. So easy, but between Pegnitz and Pegnitz are 100.000 km.

Where can we find the time? it´s really simple…. Wieland and Galja are retired, Davit makes a break.

Can we be reached on the road? Yes! We have a guest book and we welcome any mail.